Our YMCA turns 50 YEARS OLD in 2022 and we are planning a year FULL of events to celebrate, including an Anniversary Gala at The Boca Raton on December 3, 2022.

Stay tuned for more events and opportunities the entire family can join in on to celebrate this milestone year!

WHERE IT ALL BEGAN...

In 1969 a group of community leaders led by David and Betty Jo Ashe shared a dream of building a YMCA in Boca Raton.

They raised $30k to start the program and in 1970 Texaco Oil Company donated 15 acres of land in Boca Del Mar.

In 1971 a capital campaign led by Peter Blum raised over $500k for construction and in 1972 the YMCA of Boca Raton was incorporated and our Y began.

In 2000 the YMCA of Boca Raton became the YMCA of South Palm Beach County, and we opened other locations with the DeVos-Blum Family YMCA in Boynton and the YMCA @901 NCCI Holdings, Inc.

BE A PART OF OUR HISTORY

Champions Members will receive limited Y memorabilia, an invitation to a special VIP event, name recognition throughout the year and more!  Download brochure HERE and learn how you can make an impact! 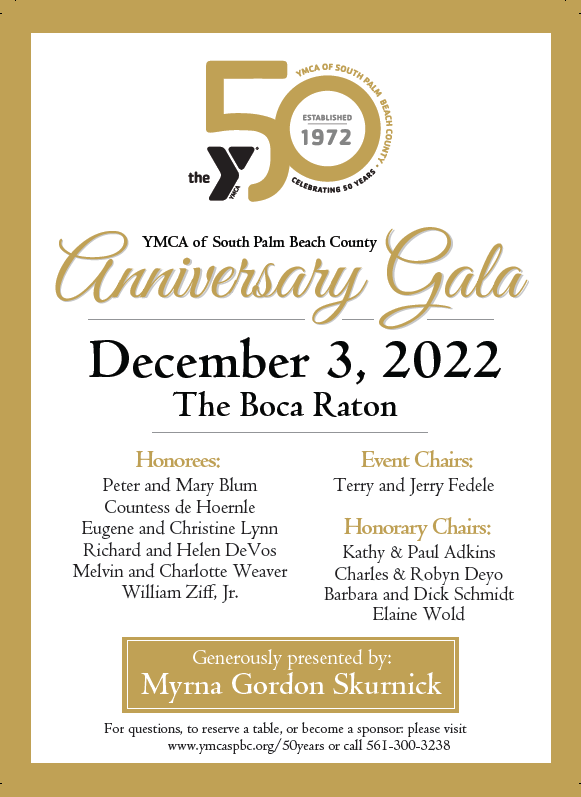 Contact our Coordinator of Special Events & Projects,  Heather Dupree 561-237-0965 to learn how you can be part of our milestone celebration!

GET THE LATEST NEWS